THE FIELD OF URBAN MEMORY, as Mark Crinson suggests, ‘indicates the city as a physical landscape and collection of objects and practices that enable recollections of the past and that embody the past through traces of the city’s sequential building and rebuilding.’[1] Architecture and objects in city space are the physical repositories of the lived experiences of past inhabitants and visitors.

The city as palimpsest proves a particularly useful metaphor for the role of graffiti or street art in the formation of urban memory: in decorating (or defacing) the street, the city’s occupants inscribe — quite literally — their mark on the city walls. As they fade, these marks form a residue upon the city surface, becoming tangible evidence of a non-tangible experience of the city. For architect Aldo Rossi, the city itself is the ‘collective memory of its people’ — its identity or soul is formed by the accumulation of these traces of history.[2]

palimpsest — n. 1. a manuscript or piece of writing on which later writing has been superimposed on effaced earlier writing. 2. something reused or altered but still bearing visible traces of its earlier form. Origin: mid 17th century, via Latin from Greek palimpsēstos, from palin ‘again’ + psēstos ‘rubbed smooth’. —palimpsestic adj. 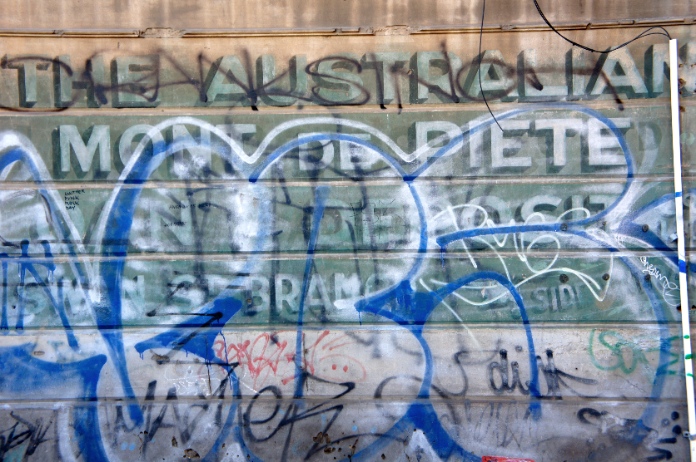 Whether in terms of a palimpsest of graffiti on a single wall, or the relationship formed between different pieces of art as a person moves through interlinked urban spaces, the residue of street art upon the city is indicative of bodily engagements with the material world for both ‘writer’ and ‘reader.’ For archaeologists, the physical forms of historic or ancient graffiti enable the reconstruction of human interactions with the material surfaces on which they are found, but also the interactions of people within communities. The graffiti of the ancient city of Dura-Europos on the Euphrates, for example, has been used to examine the presence of a military community in the town and its interactions with the non-military citizens.[3] 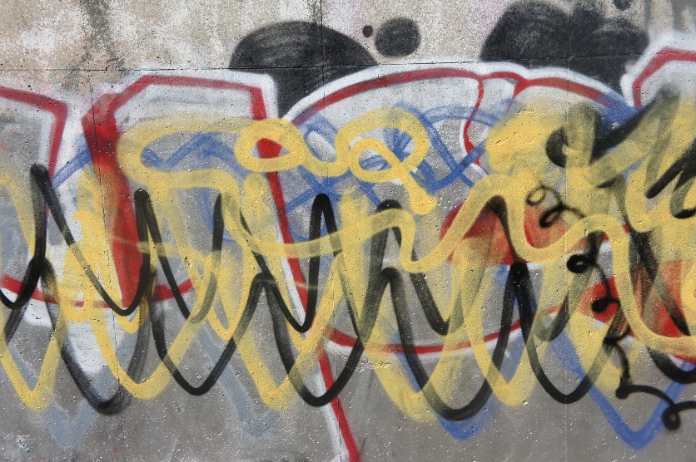 In the contemporary city, the very presence of so much graffiti boldly placed in ostensibly inaccessible or forbidden sites serves as the sole attestation to dangerous acts performed and to somatic movements through vacant or dehumanised places  — the sides of tall buildings, the undersides of bridges, off-limits drainage systems and much-policed train lines.

Modern graffiti and the now-everywhere tag first rose to prominence in New York City in the 1980s, where young graffiti writers began to leave their names on the walls of the city’s subway stations and its trains.[4] The trains circulated their signatures along local transport lines and out into the city, doing the legwork for the tagger by ever-shifting the spectacle of their work. As tags became more prevalent, artists sought to distinguish their marks and ‘light up the line’ by brandishing larger and more elaborate ‘pieces’ (short for ‘masterpieces’) on the sides of the trains.[5]

These traces can take part in the unconscious layering of urban memory, but writing on an object, surface or landscape can also be a deliberate and self-consciously commemorative act, a means of laying claim to a sense of place. A ‘tag’ may function as an ‘I was here.’ This notion can be intensely self-aware: a particular tag that has been showing its face around Melbourne recently (the crudely-sprayed image of a cat) has begun appearing with captions such as ‘New shit’ and ‘I’m out here too!’ Not only does it mockingly break the ‘fourth wall’ for its audience (competing taggers, graffiti-spotters and, even, disapproving members of the commuting community), but this kind of self-reflexive commentary also reveals a fundamental and strategic effort to extend the tagger’s sphere of spatial ‘ownership’.