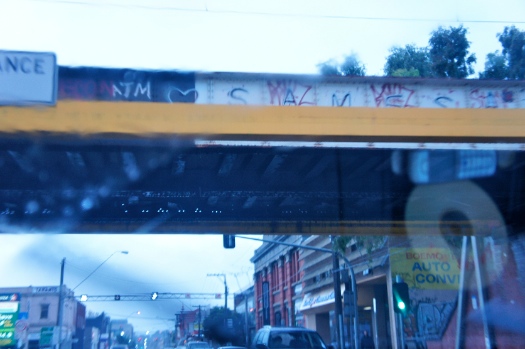 The city at large and at small

I LIKE TO THINK of the city, particularly an old city like Melbourne, as a palimpsest — like a parchment, the city is a field of inscriptions, some faded and barely visible, some newly made, the traces of all layering themselves into the thickness, complexity, and sometimes illegibility of urban history and life. As you walk around the city in which you live, or as you view it from afar and above, opening yourself to the vision of the palimpsest allows new glimpses and new pleasure in the small alongside the large.

From a suburban window overlooking Melbourne’s centre, layers signifying the city’s history of change and continuity stretch forth and stretch upwards in echoing forms: Victorian church spires, industrial chimney stacks, the lights of the MCG, the Eureka Tower, and the tilted cranes that signify the ongoing reshaping of the city. Not seen is the change to which only the landscape has borne witness, the invisible traces of a long history of human relationship to the land before it became ‘Melbourne.’ All are interspersed with the vestiges of the natural environment that — from the standpoint of the evolutionary geologist — merely waits its turn to reappropriate the land.

But urban memory may also function on a spatially and experientially more intimate level. Within the centre’s labyrinthine pathways, the soft-textured surfaces of the city, like the plentiful Victorian brick, plaster and stone walls throughout inner Melbourne, are inscribable: bricks chip and erode, paint fades and flakes from the surface. Inhuman forces — the sun, the rain, the wind — operate in alliance with human action over time, eroding and texturising space. Thus memory writes itself indelibly on the literal surfaces of the city.

One thought on “Longform // Seeing the city as palimpsest — part I”